Drama Catch Up: Peeking in on Upcoming Dramas and Casting News

Posted by Stephanie on January 16, 2014 General

I’m  not sure where I’ve been but I’m feeling woefully behind the current casting news and new show information. It just goes to show that Kdrama stops for no man–or blogger.

For one I can’t believe that no only has Kim Hyun Joong’s drama Age of Feeling made it all the way through pre-production, found a network, and has already begun it’s run. Awww…is it weird I feel proud of our little Kim Hyun Joong? Despite this, I can say I honestly have no intention of watching this drama. I know what you’re saying…but…but…what about this?

KHJ got freaking built for this drama. Seriously what happened to our little JiHoo?

No, it’s not him and his questionable acting talents which make me not want to watch this, actually, I know he’s worked really hard for this and I hope it works out for him. What I object to most vigorously is the blank faced heroine they’ve chosen for him. UGH. After Bridal Mask just seeing her face makes me cranky.

Why do people keep casting her? (Although my guess KHJ is going to look like a brilliant actor next to her.)

I guess we’ll see what happens. I never like to say absolutely positively no to anything, but this one has got to be the next big thing for it to find a place on my TBWList, abs be damned.

Looking at the other end of the spectrum, rolling out pretty quickly is the new drama, I Need Romance 3. Everything about this show makes my glands salivate. I actually don’t even need to read anything, just this picture alone is enough to make me go SIGN ME UP!

I think this is finally the Noona Lover romance that is actually going to work for me. It helps that I really like both actors, I like the series, and I love me some cable network shows. Chances of me actually simulcasting this one? The excited burn in my belly says pretty damn high. My schedule though probably has other plans.

Another entry on the “when heck freezes over” side of the watching list, Full Sun. Have you guys heard about this one? We’re talking full on, melo-apalooza. 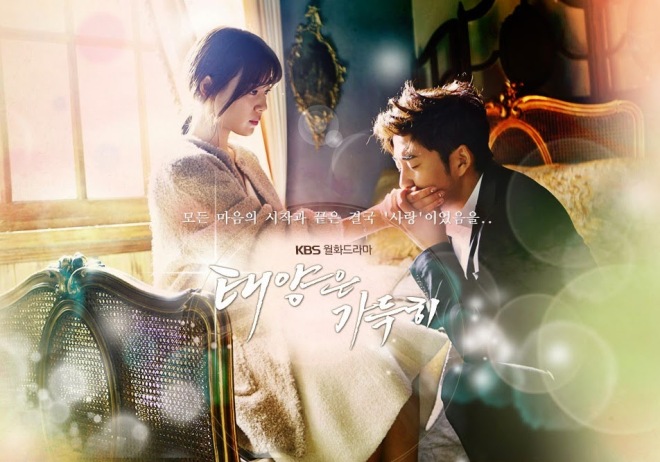 Get out the hankies guys, these people are gunning for our tears. You can’t tell me that when the hero kills the heroines fiance and they accidentally fall in love with each other, that this story can end on a happy note. I was going to say, “I hate it when dramas set out knowing that there will be a ‘bittersweet’ ending.” and while I still dislike it, would I rather have unexpected melodrama? “Surprise, everybody’s gonna die!” Um. No.

This drama initially caught my eye as the fiance killing hero is played by Yoon Kye-sang, which everyone will remember as the B-lead in Greatest Love, but for me, I always remember him as the hero in Who Are You (not the recent ‘I see ghosts’ version but the ‘hero and the dad of the heroine share the same body’ version. Awkward.) He was probably one of the best things in that drama.

You’re Surrounded! By Khotties? A post I meant to write last week was on the casting of Cha Seung Won in the upcoming cop drama, You’re Surrounded. Or a cop in training drama? (Why am I having visions of a Korean Police Academy? And why do I find this idea to be AWESOME?) Also rumored on board is the cutie jokester Lee Seung Gi. If both of them do stick with this drama (and as it’s not scheduled to hit the airs until after Three Days which doesn’t even begin it’s run until February) this could be a fun drama. And it won’t be their first time acting together. One of my favorite cameos in Greatest Love was the Lee Seung Gi’s primadonna version of himself. His interaction with Cha Seung Won was so funny!

And the casting isn’t the only reason to look forward to this drama, it has a pretty good pedigree. Between them the writers and production team have been responsible for some pretty big hits like Ojakyo Brothers (which I still have yet to watch), History of a Salaryman, and Giant.

So a good solid team behind it and (so far) some good actor. I guess we’ll have to keep an eye out on this one as I’m interested in who else they’ll get on the cast and the actual tone of the show.

Now this drama is so far back in the works that it’s still probably considered rumor and innuendo, but I’m pretty, pretty excited about it. Why? GONG HYO JIN! Man, I love me some Gong Hyo Jin. She and former khottie Jo In Sung are currently ‘considering offer’s’, which we know could easily go either way. I’m excited about this as it’s a melo, which she doesn’t usually do but totally has the range for. There’s also the premise which features a hero with with a compulsive disorder which for some reason I love, and Gong Hyo Jin would play a psychologist. I’m not sure as she is his psychologist, as that would be very wrong, but maybe that’s what makes it a melo. I really hope this show, and it’s casting, comes through.

And we’re still going! (I’m telling you I missed a lot)

The hardest working man in Kdrama may be coming back. Lee Jong Suk, is currently looking over an offer for his return in the drama Doctor Foreigner. Oh noes? Another medical show? When will these die out? And another young brilliant doctor? Ho-hum. Brilliant doctor faces prejudice? Last year was Joo Won’s autistic doctor, a few years ago, New Heart and Brain had doctors from poor backgrounds, and this year it will be the doctor who faces prejudice because he comes from the North. I know for lots of you, a Lee Jong Suk casting means an automatic watch, but I’m going to have to wait for more info. Doctor Foreigner is currently looking at a March time-slot, so I’m guessing casting has got to be nailed down at any moment.

Okay. I’m realizing that there are even more out there that I missed. Is it me or does there seem to be lots of low key dramas coming our way? Lots more dramas but I’m officially bored (with the writing not so the dramas themselves. Although…maybe it is the dramas…)

So, anything out there that you’re particularly interested in?