Posted by Stephanie on April 8, 2014 General 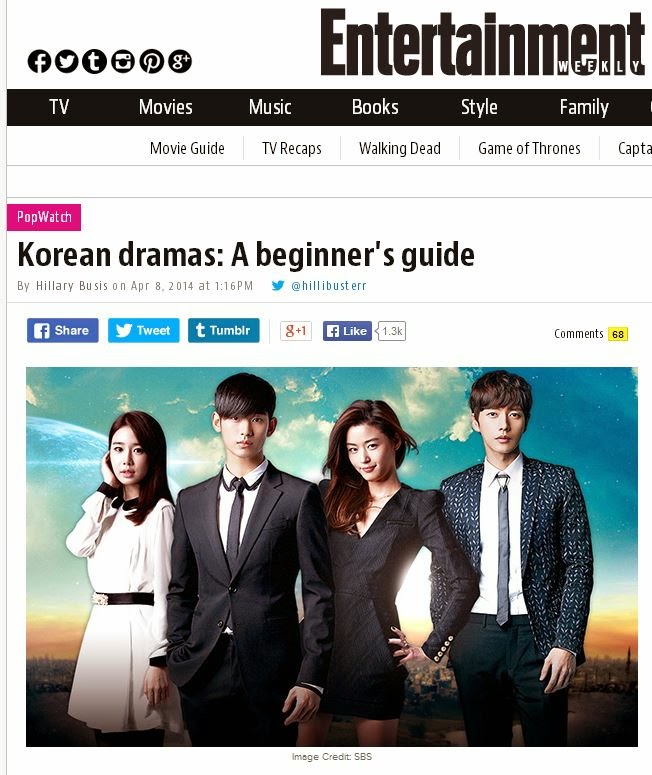 So, I was casually flipping through my newest edition of Entertainment Weekly which is pretty weird in itself as I ended up with the subscription to support my nephew the boy scout and, since I don’t keep up with US entertainment anymore, is pretty much wasted on me. The last couple of weeks I’ve been forcing myself to at least flip through it–and then–there it was!

And not in a snide or ironic way either. It’s more of a “Hey, we’ve heard lots of people are starting to watch this, here’s a primer if you want to start.”

Seriously guys, what a huge head rush this was! It was like a big stamp of approval on this addiction of mine (ours). Like a sign that says “we’re not weird, EW says so.” Now is it weird that I want to laminate it and keep in my purse for when I meet someone new and have to tell them that I run a blog on Korean television? Take that eye rollers!

Of course, there is also the smugness that is also part of it–I feel like I’m on the inside–that I’m finally ahead of the curve on new fad. (I’m choosing to ignore the fact that I’ve only actually been watching for a few years and not nearly as long as some of you lifers. But I’m not last on the boat–which is what usually happens to me and pop culture trends.)

But now I”m in! I’m at the cool kids table! I’m looking at all the newbies just starting out and going ‘awww…aren’t you cute?’. I’m telling you–giant headrush.

Which brings me back to the article. I wonder–is someone at EW a closet Kdrama watcher? Or did they get word of the influx of Kdrama and decided to do an article? Looking at the suggestions, I’m guessing they had help, they contacted someone, said ‘suggest some stuff’ and this is the list they came up with. With the writer referencing DramaFever, I’m guessing the article came from them.

So whoever it was picked out some genres and suggested some dramas that fit the bill. This is where I thought it was written by someone who was not actually a fan of the genre. Not that their choices were horrible, it’s just that some of them were…odd. One of the hardest things to do is choose the perfect dramas to suggest to someone who has shown interest in trying kdrama out. You only have one chance to make a first impression and all that. So lets talk about their choices.

Teen Soap: Boys over Flowers and if you like that Heirs. Okay, I get Boys Over Flowers. It is a drama that dragged a lot of kdrama watchers into their current obsessed status. But then Heirs? I know I didn’t get past episode one, but I would not have a newbie watch that. For another teen show I may suggest Dream High as this can get the people who like teen drama and the people who like Glee. Not to mention, Dream High is actually pretty good.

Romance: My Lovely Sam Soon and if you like that Coffee Prince. I don’t know, I guess this is okay–Sam Soon basically brought the genre to it’s current state–it’s just not one I want to see. Not to mention the fact that Coffee Prince is such a stellar drama I hate to see it play second fiddle to any drama.

Historical Fantasy: Gu Family Book and if you like that Empress Ki. Um. No. First off, the second one isn’t a fantasy and I’m pretty sure in no way should you be recommending Gu Family Book to anyone. Knock off the fantasy, keep it just historical and make the first option Sungkyungkwan Scandal. Yes, there were issues with the ending, but this is a great way to get people into Kdrama historicals! It’s cute, fun, and it’s got the best bromance in all of Kdrama. Really, what better way to hook people into Kdrama than Song Joong Ki’s winks?

I hear Empress Ki is pure crack, so that can totally stay on as number 2.

Action Thriller: City Hunter and if you like that Three Days. Hmm. City Hunter? I haven’t seen it but I can totally get behind that–but Three Days isn’t done and I’m not hearing that people are loving it. Wouldn’t a better one be Heartless City? It’s slick, well done, and reminds me of a lot of American television. 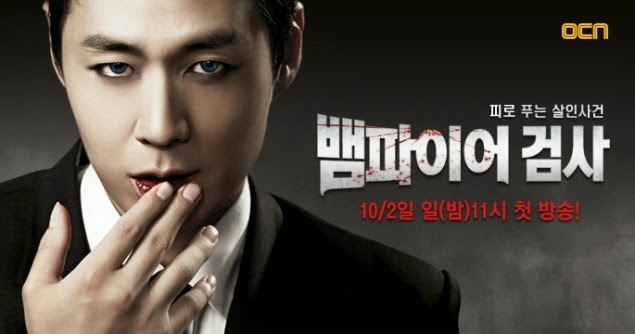 Paranormal/Horror: Vampire Prosecutor. Is there a lot of Parnormal/Horror dramas out there? With the popularity of Vampires here, I’ll say yes, good recommendation.

Genre-Defying Miscellany: My Love From Another Star and if you like that Secret Garden. Well, My Love From Another Star is pretty much a given, but I had issues with Secret Garden (You know, the whole part where I though the body swapping was unnecessary and introduced too late in the game?) instead, I say we should recommend Nine. It’s Genre-defying, twisty, and fairly well done. And I think the whole faux-cest storyline will do well here.

All in all, I say, great job EW, thanks for taking note–and for not making fun of this awesome genre. We’ve made it guys!