DramaFever Awards Night: A Report From the Inside

I did it again! After managing to again cast a magical spell which tricked DramaFever into believing Crazy was worth a press pass, I put on what I considered appropriate for their ‘dressed to impress’ request on the invite (which I learned later by looking at the eager crowd was pretty much anything), I made made my way with Thea to Chelsea where DramaFever was hosting their first ever awards ceremony for their second annual DramaFever awards.

Now it was fairly well known that Park Shin Hye was going to be there, as well as TWDrama star Chris Wang, and the band Magnetic North, but there had also been some lesser heard unsubstantiated rumors that Gary from Running Man would be there as well. I didn’t really believe it as I figured if DramaFever had been able to get such a big name, they’d sing it from the rooftops. 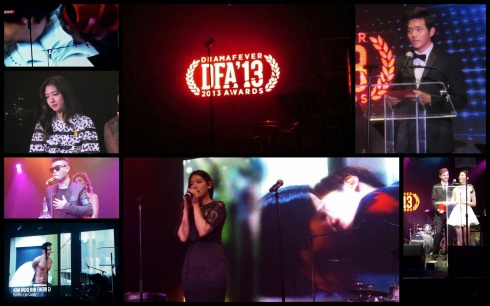 With guts handed to me by Thea I walkedpast the long lines of people waiting to get in all decked out in their ‘dressed to impress’ and found a man with a clip-board. (I should also say that it’s due to Thea and Cherry Cordial that I was able to get my press pass–thanks ladies!) Without Thea I would have been lingering at the back of the line, trying not to be noticed, as I was fairly certain they wouldn’t let me in as I’d foolishly left my ID at home.

But with a quick name drop of my contact of DramaFever, they were able to find me on the list, and I was my handed my official press badge–with Crazy’s name on it and everything! And I was ushered up the stairs with the rest of the press. At the top of the stairs, I awkwardly stood at the back of the crowd as lightbulbs flashed and workers shouted “Just pictures! No questions, just pictures!

I’d landed at the promotional photo area–you know–where the stars stand in front of a backdrop scrawled with the names of the events sponsors? And who was standing in front of me?

Holy crap guys! I can’t believe I was in the same room with her! Who hasn’t seen at least one or two or three of her dramas? You’re Beautiful is pretty much now in the Kdrama cannon. She’s been the center of so many love triangles with Khotties you can almost get a contact high from the Khottie hang time she’s had.

As I wasn’t ready for it, the only picture I got of her was as she left the area–right by me! Check out this truly awful photo.

I juggled my stuff and my “OMG” jitters, trying to get myself situated. And then it happened. The next group in front of the backdrop was the TWDrama star, Chris Wang and some guy in black with sunglasses–which, of course–was when I lost it. Gary! Gary from Running Man! It wasn’t just a rumor, he was actually there! Frantically I pulled out my camera again and started snapping away. Just as quickly though, he was gone, taken away to whatever holding pen he had been assigned. (Which, side note, he did not care for and it wasn’t long before he was out and about in the ballroom.

Wandering into the room where the ceremony was to be held, the DramaFever people were hurriedly doing run-throughs, tests, and whatever else one does before putting on such a big event. As I knew no one there, and wasn’t sure where I should be, I just moseyed around, snapping random photos, trying to 1) stay out of everyone’s way and 2) try not to be noticed by the DramaFever people, as I was fairly certain my inexperience was just rolling off me in waves.

I noticed Gary had managed to get out of the waiting room and had snagged himself a booth in a side area. From then on, I covertly tried to take photos of him. 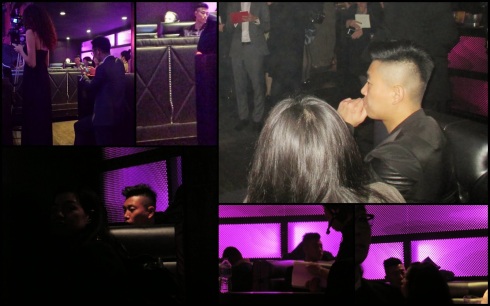 I couldn’t believe he was Right. There. What was the protocol? Should I wave? Should I go over there and say hello? Shouldn’t I try to get a picture with him? Or an autograph? In the end I didn’t have the guts. Well, that and my press badge held me back. What is the protocol as press? And do I have to follow it? I’m not technically press, I’m a blog where I squee about Kdrama. Wouldn’t it be squee worthy if I got a picture of myself with him?

In the end I chickened out and after some backup courage messaging with Thea and Cherry Cordial, decided it would be completely acceptable for me to wave at him. Which I nervously did. And he smiled back at me.

Skipping forward? I will admit that, at the end of the evening, after Gary had vacated his booth, I slipped in and took a photo of myself sitting there. Yes. Our butts touched the same vinyl–so basically our butts touched–I think I have a contact high.

Once they announced “We’re opening the doors!” I firmly planted myself in the very front row, not caring that I am pretty tall and the people behind me–not so much. And you know what? My total selfishness was completely worth it. I talked to some of the other magazines that were there and generally had an amazing time!

The event was hosted by Arden Cho, an actress on the show Teen Wolf who changed outfits several times during the ceremony and managed to look completely beautiful in everything. 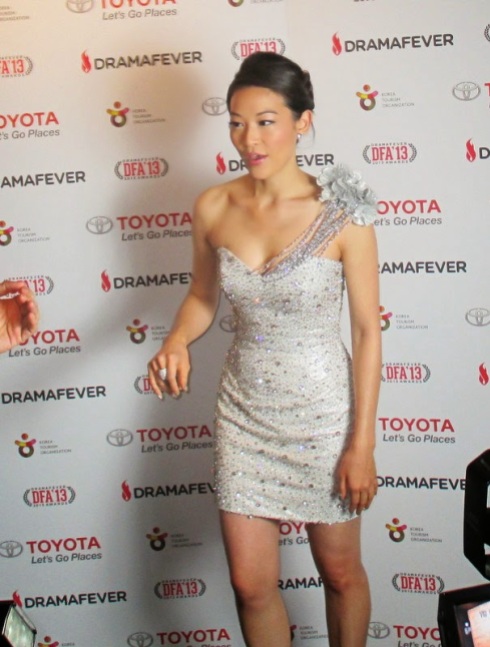 Magnetic North kicked off the night and let me tell you, before when I’d looked up their songs, I hadn’t been really interested–but on stage? They were great! It may have been the excitement of the night, but I think I will definitely give their music another shot. 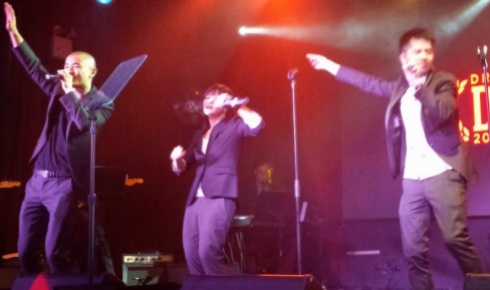 Each presenter presented 2 awards starting off with “best couple” and “best couple not meant to be”, both awards going to couples from Heirs. When the winners were revealed, a lot of the awards had the winners actually accepting the honor in a pretaped video (to great squeeling of the crowd).

When it came time for Best Variety show, the crowd was pretty freaking excited as word had leaked that Gary was actually in the room and when the show did win everyone was pretty excited. They went to a tape of Gary accepting the award only to stop the tape and join the stage–on the arms of 2 of the contestants of the Miss Korea pageant. I laughed as it reminded me of his super cheesy–hyper sexual video from his last release. You know the one that he was ‘surprised and disappointed’ it got banned pretty much everywhere.

Various Youtube and DramaFever stars came out to hand out awards. Jeremy wore a Secret Garden sequined jacket while doing a bit with Jackie–who’s dress was probably one of the prettiest of the night (although I’m not entirely sure how she breathed in it). 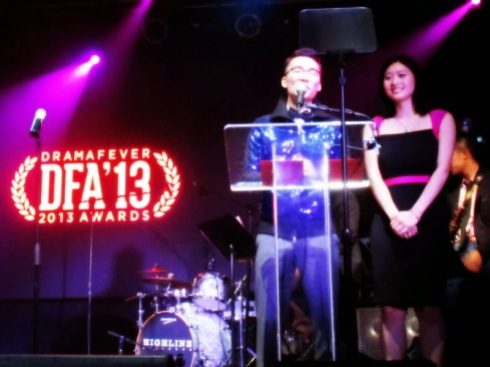 Chris Wang was frankly debonair in his tux with a wide smile and really smooth English skills. I was enchanted and totally plan to catch whatever he’s done. 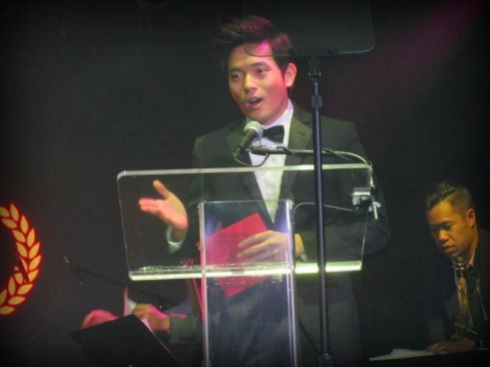 For the Best Kiss, Gary and Song Ji Hyo won for that episode where he kissed her on the cheek when GDragon was guest. In my head I was like, didn’t GDragon kiss her too? And wasn’t that awesome-er? And why wasn’t Nine nominated? Lee Jin Wook is probably one of the best kissers in all of Kdrama. But no matter because it got Gary out on the stage again–where he promised he’d be nominated for the same award again next year. So watch out Song Ji Hyo, Gary is coming for you!

As we neared the end, the girls around me were wondering when they were going to bring Park Shin Hye out, as they had a bus to catch. DramaFever was obviously keeping the best for last-ish, as she came out after winning the award for Best Actress. She wore a tight lace black dress with orangy-pink lipstick and tall thin heels-basically–she looked amazing.

She thanked us for the award, and mentioned the ferry tragedy, hoping that we’d pray for them. Sadly, and surprisingly, this was the only mention of the incident during the entire evening. I know it was a celebration, but I’d just been to Korean movie night where they’d had a moment of silence, and had expected something of the like at the awards–especially considering at the time the show that Gary is on and won for, Running Man–was still off the air.

Park Shin Hye was back again after Heirs won for Best Drama and again, it was really surreal to see her there, right in front of me, in person, when I’ve seen her in so many dramaS. 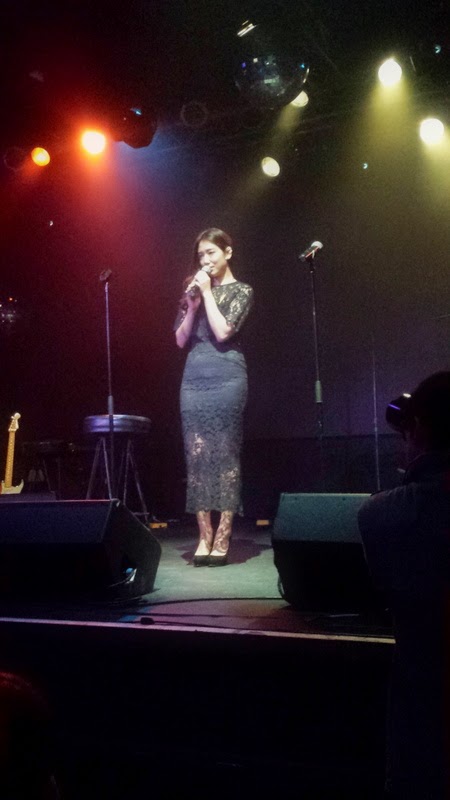 After the awards the evening turned into a Park Shin Hye fan meeting. We watched a little video retrospective and she came back out and sang a song–I think it was from Heirs. As I didn’t actually finish Heirs, I couldn’t’ tell you for sure, but they did play video in the background while she sang.

Afterwards, she changed and came back out in black pants and a striped top which had little bows in the back, and did a q&a, with questions from DramaFever and then a few questions submitted by fans–these ladies actually were called onto the stage and were able to address her, face to face. She was super nice to everyone and even gave out random Park Shin Hye gifts (a calendar, a poster, a script, and some makeup) to the question-askers.

At the end, we got one more song, and I was so excited it was one from Heartstrings! I love the music from that show.

What a great evening! I was pleased as punch to be there and certainly won’t forget it any time soon. The whole thing inspired me, not only to keep blogging, but also, to watch more Kdrama as that’s what we’re all here for, right?

Check out DramaFever’s results page where you can watch the acceptance speeches yourself!