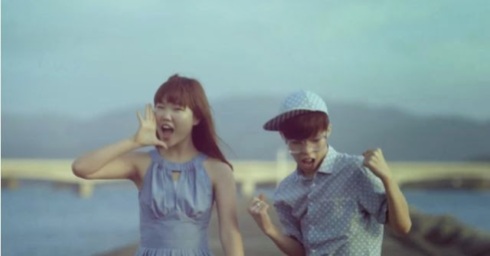 I feel like that should really be the headline. Now a few weeks ago their first song, 200% was featured on the Musical Monday. The song was cute, the video was cuter, and the whole thing gave you a bad case of the warm fuzzies. The video left you knowing the guy was with the wrong girl, his real girlfriend was a jerk, and we knew in our hearts he’d realize it and finally notice the other girl standing right there.

Well. That’s what we thought we knew.

Give Love is their third release and the video is like 200% part 2. The song again is super cute, and the brother and sister team that make up the group are both super talented and adorable. As for the cutsy version of the story? This video shows us the incidents in another light.

The spunky girl with the crush on her jerky friends boyfriend? Maybe not so innocent as she’s basically a stalker who befriends the girl just to get access to the boyfriend. The jerky friend? Only becomes jerky as she gets wise to her ‘friends’ plan. Hm. Yes, again this reminds me of kdrama, and this time? The cute girl is not the heroine but the annoying wannabe girlfriend.

Well done guys, well done! I love it when they are able to take what is expected, what we think is going to happen, and twist it to something new.

Soooo Stressed. This can only be solved with one thing: