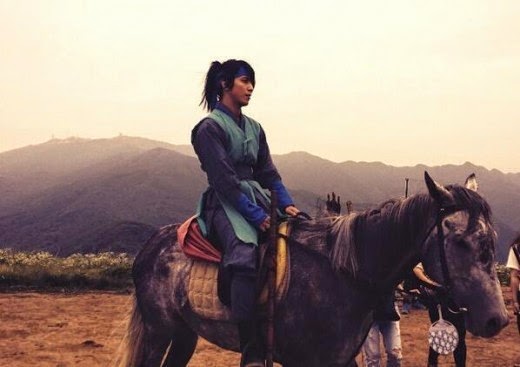 I’ll admit, the idea of Three Musketeers irritated me. I may have even did a mini rant about it in one of our podcasts. Three seasons? Really? Yonghwa in a saeguk? Really?

Actually, before I’m jumped on by rabid Yonghwa fans, I like Yonghwa–really I do. A lot. I’m just not sure if he’s ready for a saeguk quite yet–and as I am suck a fan–I want him accepted as an actor. A saeguk may not be the way to go.

However. Then I saw the picture they released of him in the role and…well….I’m interested. He looks pretty cool. I’ve always been a sucker for mane’s of glory. Of course it could be the Instagram like filter that is doing it for me–I firmly believe everything looks better in Instagram.

More information has also been released on the drama. Yes, unfortunately, it is still planned for 3 seasons all and all the actors (Yonghwa, Lee Jin Wook, Yang Dong Geun, and Jung Hae In have all signed on for the 3 seasons) however, the interesting thing is that for the first time tvN is airing a show on a Sunday, so it looks like the drama will be one episode a week. Also, each season will be 12 episodes long, with 3 distinct storylines. Hmm… maybe I’ll just think of it as a 36 episode drama rather than 3 seasons. Yeah, that will do it.