Top 5 Dramas Who Missed the Landing

Last weekend I had the…displeasure to finish the TWDrama, In a Good Way. Throughout most of the drama, I really liked it. Yes, it moved slower than a snails pace, and had basically no plot at all, but it was a character driven drama, which is usually right in my wheel house, so that was fine. But then, as the last 4ish episode came in, the drama went and decided to get a plot. A bad one. A plot bad enough to make me very cranky, I believe I posted this online:

The ending just left me with a bad taste in my mouth. Which got me to thinking about all the other dramas that were perfectly enjoyable, until those last few episodes, or even minutes came in and the writers blew the ending for some reason or another.

*Warning, this WILL contain spoilers… 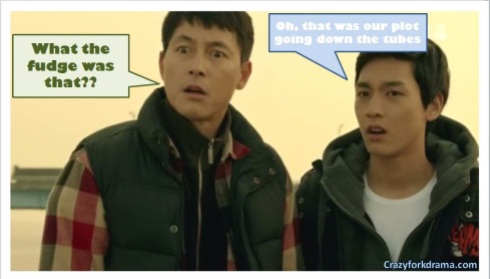 I watched Padam Padam as my Christmas drama. I was blown away. The story, the emotional twists and turns, the production value, I was hooked by what was a top notch stellar drama. For the most part, I knew in my heart of hearts this was going to be the drama to finally knock Pasta off its #1 kdrama pedestal (yes, I liked it that much.) Then the last few episodes came and the drama became maudlin, morose, and it broke down everything we spent the entire series creating. The last three episodes took a drama I knew was going to be number one two me and sank it to one I will probably never rewatch again. This is a shame as this story, these characters, and the effort put into it deserved more than this ending. It makes me leery of watching anything else this writer produces.

Assorted Gems. A 50 episode family drama that meandered and plodded it’s way through the trials and tribulations of several families. Unlike Padam Padam which sank lower and lower for the last few episodes, Assorted Gems remained pretty good until the last 15 minutes or so and then BANG! They decided to cram at least 3 episodes of plot into the shortest time span possible. We had the death of the mother, we see Ruby married her feckless ex-fiance after he dumped her–twice and then we see the bratty sister crying at her mothers grave, married and pregnant to a man we never saw once in the drama–considering she had been engaged to Amber just 10 minutes before, this was a bit of a jump and made not just me, but lots of fans of the show go “What the fudge??”.

Yes, we can all agree, Heartstrings is not the best drama in the world, but I enjoyed it more than others. I was invested in the characters, I liked the storyline, and I really did love the romance between the two. However. As soon as he saved her from her competition so she would be able to audition with the rest of the band and he fell, hurting his hand, my thought was “Uhoh, I know exactly where this is going to go.” And it did. He damaged his hand, broke up with her in order to ‘noble-y’ back away, forcing her to fulfil her dreams. UGH. I hate it when a show gets predictible. And then when she came back to school? There was no reason for him to continue to act like an ass-hat. She was already on her way to fame and he was on the mend–they could have gotten back together. Then when they finally did get together? I’m fairly certain this ranks as one of the worst kisses in all of kdrama. These people are supposed to be in love? And finally reunited after a year apart? Then what is with that god-awful kiss??? It was the final nail in the coffin for what had been a completely enjoyalble drama.

I’m guessing not a lot of people have seen this one as it’s one I came across during my Kimura Takyua JDrama marathon this winter. This is a psychological drama which twists, turns, and weirdly makes you hope that this woman who lost her memory and her stalker could make a go of it. You know, until it turns out that the stalker is her brother who then randomly falls dead in the last seconds of the drama. What the? 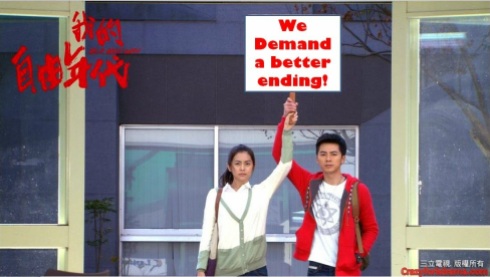 Yep, this about sums it up:

After 19+ episodes of cuteness and light, the drama takes a dramatic turn which involves the father we don’t care about, the legal battle that had no place in this meandering character drama, and then topping it off with our hero breaking up with the heroine ‘for her own good’ in the last few minutes. The open ending was just salt on the bitter wound.

King of Dramas. You know what? If it comes down to leaving for the hospital to have the operation which would save you from going blind or driving the end of the drama to the station? GO TO THE HOSPITAL! Blindness is for life. Your career, which you’ve proven in the last 18 episodes, can be built up again.

Soul. This had to go in honorable mentions as I remember really liking it, super-duper liking it, until the last 2 episodes–but I have blocked the reason why out of my mind, so I can’t really count it. I just know I’m mad at this show and I think it’s the doctors fault.

Musical Monday Part 2: The Can You Name This Song Edition