New York City has a lot of parades–a lot. However my favorite, hands down? The Chinese Lunar New Year Parade. Dancing Dragons? Confetti cannons? What is not to love?

This year, despite the snow, I packed off my new camera and headed off, ready to fight with the massive crowds, the old ladies calling out “Handbag, handbag, you want handbag?”, and wet cold feet in order to see the year of the sheep (or ram, or goat).

Unfortunately, getting there, I realized I was late, the crowds were WAAAY bigger than last year, and the roads were cut off, so I couldn’t meet up with my friend. (Ugh, and from the looks of her pictures it looks like she had a much better spot than I did.) But finding a collection of people who were slightly shorter than I was, I decided to park it and wait for the fun to begi n. While waiting for the parade to begin, I realized my memory card wasn’t working and I took a confetti cannon to the head. LAUGH–I’m still finding pieces of metalic confetti everywhere.

My favorite part of the parade? Well, besides this picture of the little girls in the sheep costumes? (You can’t tell me that this isn’t the cutest thing ev-ar!)

Nope, it was the Chinese man who had the misfortune to be standing next to me. Why misfortune? Well, it had nothing to do with me, but we were so far back and he was shorter than I, so he couldn’t really see what was going on. But you know what? He didn’t seem to care. He spoke no English, wore a jaunty hat, used a used confetti cannon as a walking stick, and waved an American flag as hard as he could, cheering at all the floats.

He was especially pleased by the confetti cannons, the special ones which also had some sort of parachoute carrying off Chinese well wishes.

Oh, and I cheered for him when he grabbed one of the t-shirts being thrown out by people walking the route. It was the only English I heard him say. “FREE STUFF!” It was ah-dorable.

As it was the year of the Sheep/Ram/Goat, there were lots of Sheep–you know because they are cuter than goats. I thought they were a lot prettier than the horses of last year. 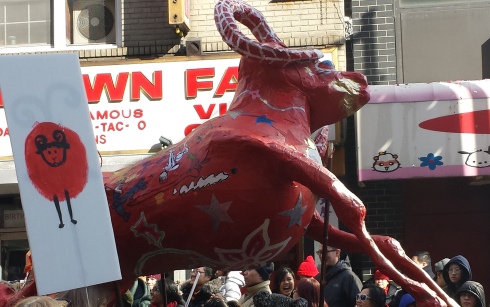 Beauty queens were on hand to add some glamour to the occasion. 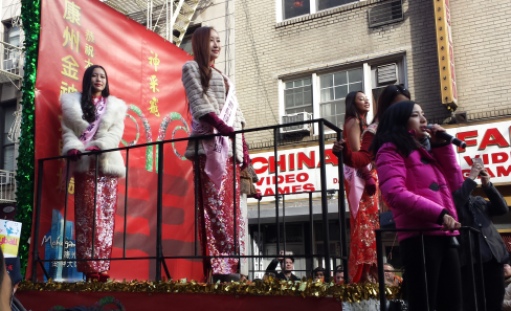 I wanted to give these girls a coat.

There were a bunches of this guy hanging about.

But my favorite is, as always, the dragons dancing  and weaving their way down the street.

They are just so interesting!

This one reminds me a bit of a big shaggy dog. Not sure if that’s what they were going for, but there it is. Also? I’d hate to be the guy who drew the short end of the stick and had to walk the entire parade route as the back end of a dragon.

This guy was…different. I never realized Dragons were a fan of the fanny pack.

Is it me or does this dragon look like he’s got permanent deerp face? 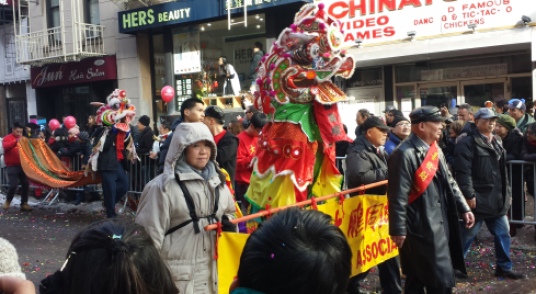 Here is a video I took of the double dragons coming down the street.

I have a feeling like this group was just wandering around looking for a parade to join.

However, I did appreciate their effort.
[youtube https://www.youtube.com/watch?v=iuxkLa3dHOM]
All good things must end–and so did the parade. 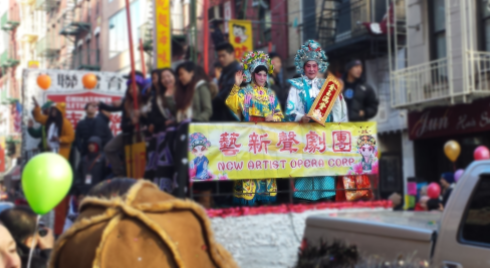 On my way back to the train, I found this guy–who’d obviously gotten lost on that parade route.

Me and this glitter suited, fanny pack wearing dragon can’t wait for next year! 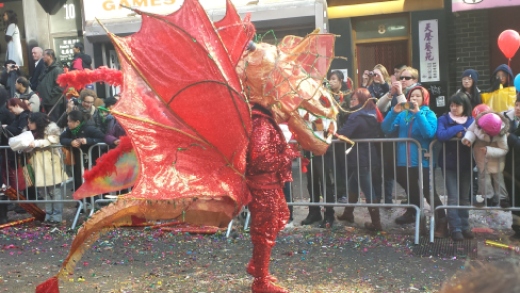