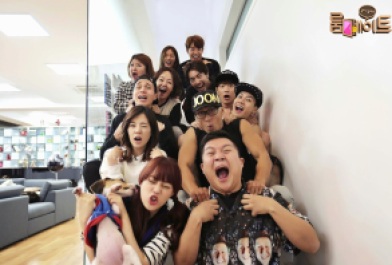 If you listen to the podcast, you’ll know that there is a new Stephanie obsession in town–and his name is Jackson. Finally, after lots and lots of pressure, I finally gave in. It was more “Fine, whatever–GOSH!”

Why did I resist for so long? It’s kind of the same reason I can’t watch We Got Married. I’m cool with regular life variety like Return of Superman and challenge variety like Running Man and Barefoot Friends (you know, before it got boring) but the set up sort of variety where you have to suspend your belief that the whole thing isn’t super duper fake. I was able to push past my ugh for the first couple of episodes of the Song Jae Rim and Kim So Eun couple on We Got Married, but once I got attached, and then remember it was not real? I just couldn’t make myself watch anymore.

Does that make sense?

How does this pertain to Roommate? Well, it was the feeling I got off it and the fact that I heard that they were pushing lovelines. Ooh, awkward fake non-romances that I have to pretend to believe extend off the stage? Ummm nope. Then in season two where they actually billed it as people dealing with painful pasts? Well, I dislike that even more than the fake romances.

So when people told me I absolutely had to watch Roommate I rolled by eyes and just went about my day. But then Crazy For Kdrama crashed, as did my world, and Cherry said, you need light and fluffy and you know what’s light and fluffy? Roommate. As I was obviously in a vulnerable place and my defenses momentarily weakened, I grudgingly agreed.

First episode? It was cute. Second episode? Not great. But then, for some reason, it began to marinate. The stew began to cook in my brain-pot and I started, episode by episode started to look forward to Cherry and my Roommate time. It makes me laugh and is super freaking adorable.

Now there are many a people l like in this show. Gook Joo, she is cute and funny, and I just want to be her best friend. I’m currently crushing on the Japanese guy, as he is so pretty, and his personality, how you can just feel how awkward he feels doing some of the set up things, is similar to my own. Young Ji with her funny open mouthed laugh and her need to give her possessions to anyone she thinks would enjoy them, is just funny. But the real reason I watch the show?

Jackson with his English skills, his love for his mother, and his need to literally flip for everyone he’s introduce to, just captured my heart. He is just so adorable and fun. He’s eager to please everyone around him and is super competitive. I loved him from the very first episode where he had his roommate get up at 2 in the morning to go out and eat meat with him. And then he gets back he only has a half hour to sleep before he’s picked up for his morning schedule and he brushes it off like it’s nothing? Oh to be young again.

Except I was never that young. Ever.

When people say, you should go back and watch the first season–I say no, no way Jose am I watching a Jackson-less Roommate. Or Gook Joo.

Why am I writing about this now? 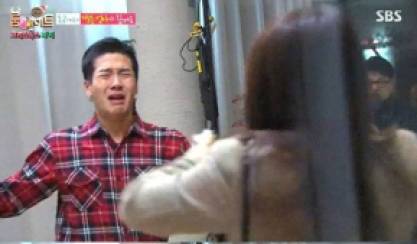 We finally made it. We finally made it to the episode that everyone has been talking about, the Christmas episode where Jackson gets to see his mom. And I’m happy to say, it did not disappoint. I laughed, I cried. I cried a lot. Not as much as Jackson, but it was pretty close. His love for his mom who he hadn’t seen in over two years just hurt my heart. To see in front of you what an idol’s life is like is hard. Not to mention, in the previous episode when they tricked him into believing his mom had showed up for his showcase? Was so freaking sad. The look on his face? Him trying to hold back his disappointment? There was no way that was faked and it just makes you like him more.

I swear, I could watch an entire episode of just Jackson. The only downside of the Christmas episode? All the JYP singing. Usually I like and am charmed by JYP, and I’m sure his promoting his new music was a big part of him coming onto the show, but it was taking valuable time away from Jackson and his mom time.

Cherry and I are trying to watch these episodes as fast as possible because 1) I love me some Jackson and 2) my attention span is not really that long–we need to get as many in before I lose interest.

So who’s with me? And what’s your favorite Jackson moment?

Musical Monday: The MFBTY Is Back Edition!